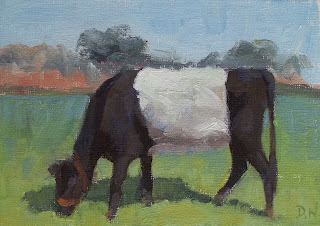 Cow #2 Belted Galloway
Click here to bid on this painting.
Posted by Deborah at 6:32 AM No comments: 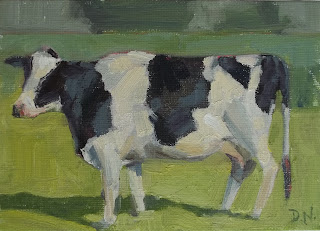 I've painted a series of cow paintings to post while I'm out of town. Here's the first. Enjoy!
Click here if you'd like to bid on this painting.
Posted by Deborah at 10:23 AM 1 comment:

Recently, I had the opportunity to paint in Nicasio and Point Reyes Station, located in West Marin County in the same vicinity as Bodega Bay. You know, the infamous town where the Birds went Berserk? I digress.
Besides hunting for sea glass, (See "Rubber Ducks!" blog posted on 9/8) painting en plein air is one of my favorite things to do, especially if my mother is with me. We began painting in Nicasio around 8 a.m. when the air was still moist with the smell of damp earth. Mom chose the old post office to paint, while I set up across from a farm house.
After a few hours, we moved on to the quaint town of Pt. Reyes Station, home of the Cow Girl Creamery. Maker of the fabulous "Mt. Tam" cheese. After a lunch of Ruben sandwich with fries at the Pine Cone Cafe, we found a small, weathered, brick house with a blue door on the outskirts of town. We were able to paint quickly before the fog came in. 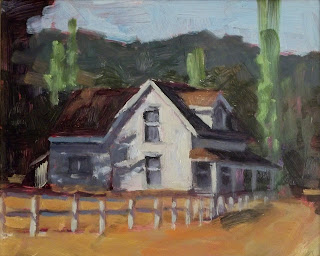 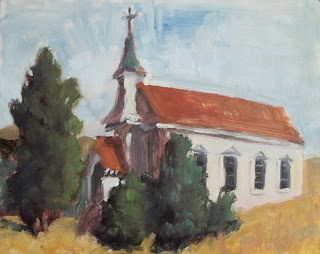 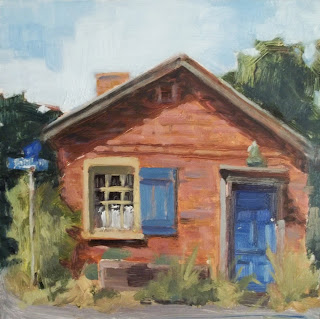 "Blue Door" Click here if you'd like to bid on this painting.
Posted by Deborah at 6:13 PM No comments:

Last Saturday, instead of Woodstock - “3 days of peace and music”, it was Woofstock -"one day of dogs and music" held at the beautiful Marin Humane Society in San Rafael, CA. The Woofstock fundraiser was a huge success. I was honored to be a participant in this year’s event. I’d never visited the campus before and was very impressed with the bright atmosphere and clean surroundings. Everybody was super friendly and helpful. The day was sunny and warm with Music, Food, Families, and a variety of breeds of "Man's-Best-Friend". Scroll down to see some of the happy visitors. Enjoy! 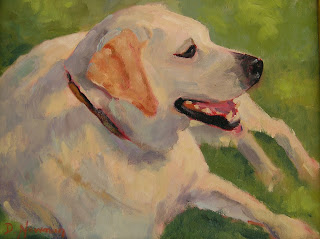 Since this is a painting blog and the subject is about "Woofstock" I thought it appropriate to post this painting I did of a yellow lab who resides in Normandy, France at the Chateau Vouilly. Lucky Dog!
100% of the sale of "Lucky Dog" goes to the Marine Humane Society. Let’s Save Lives out there.
Click here to bid on this painting. 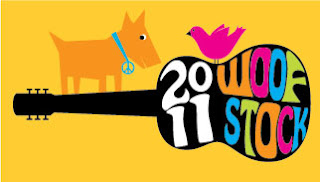 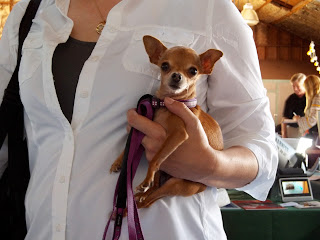 This little visitor was scared of the large 36 x 36 inch painting of my
Golden Retriever "Scout" hanging on the wall. 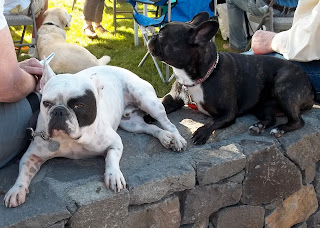 A couple of French Bulldogs know how to hang out and keep it real. 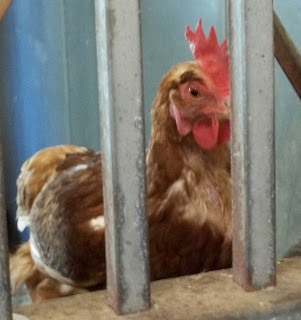 Anyone in need of an alarm clock? This cute one is available for adoption. 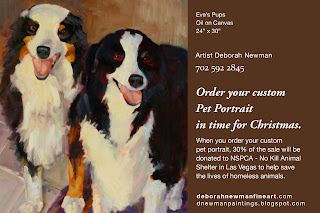 For those who can't read the fine print anymore, like me, read below:
Order your custom Pet Portraits in time for Christmas. I know, I said it ... Christmas!
When you order your custom pet portrait, 30% of the sale will be
donated to NSPCA - No Kill Animal Shelter in Las Vegas to help save
the lives of homeless animals. Las Vegas needs big help in this area.
For Contact information please visit my gallery page on the Daily Paintworks website. You can access it by clicking on the icon: Visit my gallery on dailypaintworks.com to the right. Thank you.
Posted by Deborah at 11:36 AM No comments:

Woofstock is here! It's a big fundraising shindig that the Marine Humane Society puts on every year. I will be a participating vendor selling my wares (paintings). Come to the event on Saturday, and bring your canine friends. There will be bands, groupies, dogs, artists, assorted food vendors plying aged hippies and their dogs with organic fare. Good times to be had by all. I'm posting my painting for the day of "Mount Tamalpias". All the information for Woofstock is on the poster below. 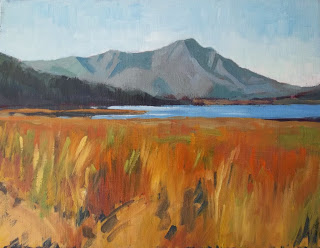 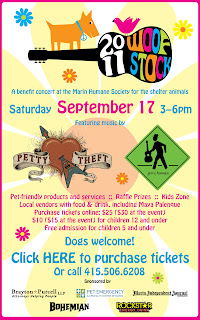 Posted by Deborah at 2:27 PM No comments:

As an avid collector of beach glass, I've often wondered about why certain colors of glass show up in abundance in locations while other colors are absent. For instance, over the years I've noticed that white and aqua glass seem to show up together in piles and are a specific distance from the waters edge, while brown and green glass tend to hang together elsewhere. (I know, get a life!). But years of these observations leave me with lots of questions. For example, why does the glass settle in one location and what's the difference between their colors that make them unite with some and not others. Different weights, ocean currents, where did they originate from, who were the manufacturer's and so on ... this is what I want to know, and this is where the rubber duck comes in.

I saw an interview with Donovan Hohn, author of "Moby Duck". The book idea began as a hunt for bath toys on the beach and mushroomed into something much bigger.
I'll paraphrase from the book jacket: "When Donovan Hohn heard of the mysterious loss of thousands of bath toys at sea, he figured he would interview a few oceanographers, talk to a few beachcombers, and read up on Arctic science and geography. But questions can be like ocean currents: wade in too far, and they carry you away. Hohn's accidental odyssey pulls him into the secretive world of shipping conglomerates, the daring work of arctic researchers, the lunatic risks of maverick sailors, and the shadowy world of Chinese toy factories. This got my attention. This is the kind of research I would have  done about beach glass if I had the time. Whew, that was a long walk off a short pier. This blog is about the iconic Rubber Duck. Here is my "painting of the day" as well as some interesting interpretations of the rubber duck by fellow artists. Enjoy! 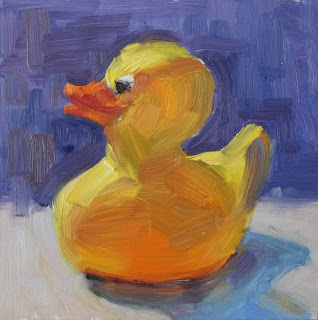 This is the book that started the idea for this blog. It's an interesting read for all those interested in global currents and the whole message-in-a-bottle concept. 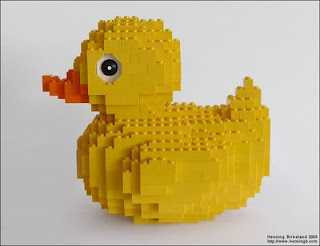 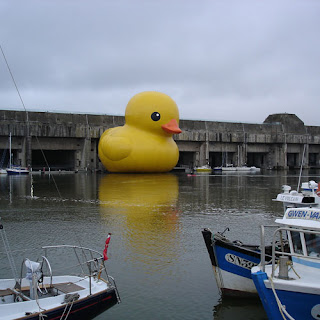 This is an actual HUGE floating rubber duck on the Loire river in France. In 2007, the duck was created as part of an art installation on a 40-mile stretch of the river. Apparently, it was untethered and floated aimlessly along the river. People would go in search of it which became known locally as "The Duck Hunt". 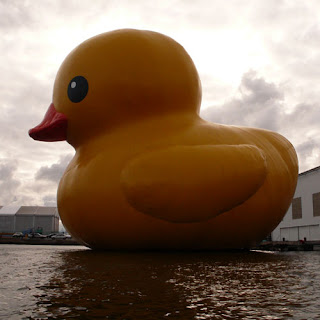 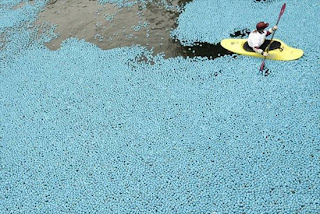 The rubber duck makes an appearance at the annual "Burning Man" festival.

And I can't talk about Ducks without mentioning "THE DUCKS" Quack! Quack!

My Gallery at DPW